Having played hundreds of variations of solitaire from dozens of books and computer implementations, it is surprising how often the rules for a particular game change from source to source, sometimes ruining an excellent game.  I suspect that there are a couple of reasons why this happens most often: first, authors and programmers copy games from some source without ever playing them, sometimes simply making mistakes in copying the rules (this even happens occasionally in books and programs which are first-rate; it happens more often in poor ones).   The second reason (more common in computer programs than in books) is that an author or programmer copies the rules correctly, tries the game out, can't figure out how to win, and changes the rules to make it easier to win (this has happened with Fortress, as we note in our article on that underappreciated game).

Our first story, about Tut's Tomb, is a simple case of programmers getting a mechanism wrong, so badly that a game becomes practically impossible (this is now part of a longer article on Pyramid).  The second story is about a game, Mount Olympus, which went from being too easy to too hard, and back again.   The third story is about a terrible game invented by mistake.  The fourth story is about a still-unsolved mystery of two well-known games whose rules became intertwined and eventually whose names became entangled. 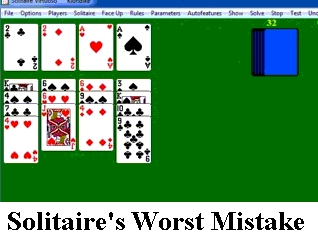 This article is copyright ©2021 by Michael Keller. All rights reserved. Most recently edited on April 14, 2021.